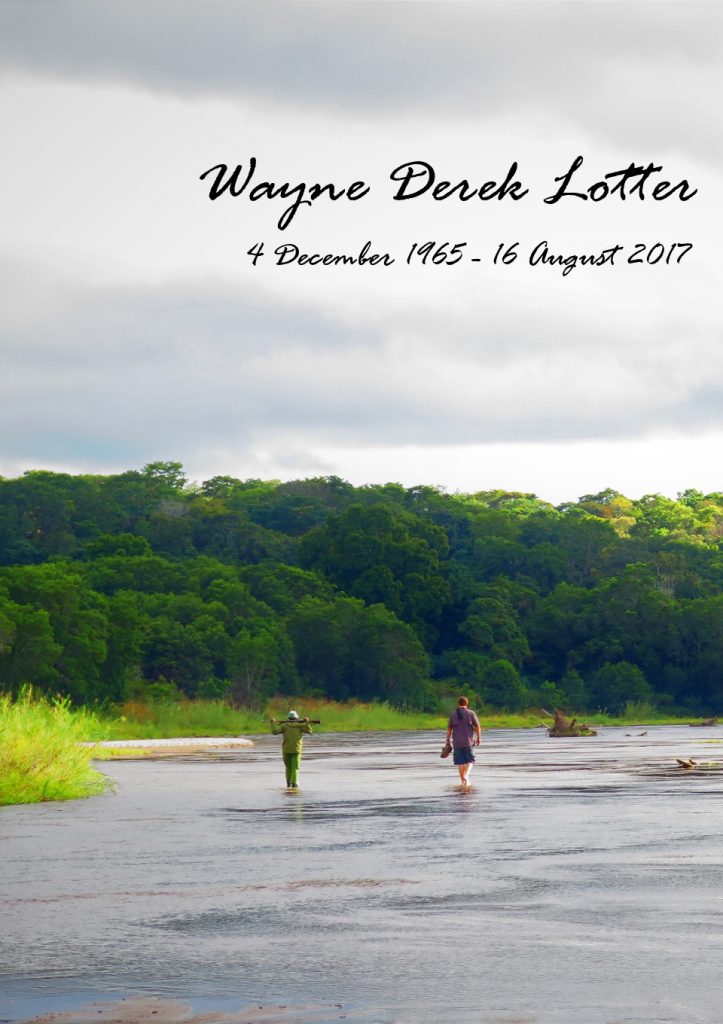 The Legacy of Wayne Lotter

PAMS Foundation co-founder Wayne Lotter was assassinated in Dar es Salaam in August 2017. Lotter’s murder rocked the conservation community and left a gaping hole in the heart of the PAMS Family.

Lotter, as he was known in Tanzania, had a passion for wildlife and wild places. He was a conservation warrior, a strategist, a trailblazer with resolute determination and courage. Lotter’s approach to life, work, and the things he cared about so deeply, reflected many of the skills and strategies one needs when exploring the deep African wilderness. At times there may be no track to follow and you rely heavily on your understanding of nature and your instincts to find your way. At times you will walk in the dark eerie night alone, guided only by the stars and if you are lucky, some moonlight. There will be moments you need to shelter from a storm or take time out to think and re-strategize. You have to search for life-giving water and determine what in this jungle will sustain you and what will destroy you. You need to be courageous and cautious in equal measure, but continue to push forward on your trail, not only to reach your ultimate goal, but also to leave a pathway for those that follow.

Lotter was a trailblazer. Using the power of relationship, his passion for nature, empathy for people and his incredible intellect, he found paths through what had been an impenetrable system. He pushed through challenges, brushed off failure, put one foot in front of the other and pursued his purpose with the relentless energy of a man committed to his mission.

Not a day goes by where he doesn’t pop into our minds — recalling his funny quirks that brightened up our day with laughter or remembering the way he spoke with such incredible courage and passion.  As we continue our work at PAMS, training and supporting rangers to undertake patrols in conservation areas, teaching communities near national parks about conservation, working with villages to reduce human-wildlife conflict, and empowering those who protect wildlife and wild places, it is done with the same spirit of integrity, zest, passion and joy shown to us by our friend and brother, Wayne Lotter.

In every action we take, we uphold the values he stood for, fought for, and upon which PAMS Foundation was built. His death is a constant reminder of the dangers we face in the conservation community. In the last year alone, more than 200 environmental defenders have been killed protecting our planet’s wildlife. It’s a dangerous world, but one Lotter believed was worth saving. As we commemorate him, Wayne and the values he upheld and lived by remain an enduring symbol of inspiration for us and many others. Wayne Lotter was a legend and his legacy lives on in our hearts and our work.

We give thanks for the heartfelt tributes to Wayne from around the world.